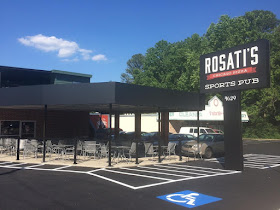 Rosati's Chicago Pizza, which I first announced plans for this past July, is finally about to open.  The restaurant, which was renovated top to bottom and now includes new furniture, a new paint job, and a repaved parking lot, is expected to open this coming Sunday May 21st.  The restaurant is located on Wieuca Road near Roswell Road in a restaurant space that has been many things over the years but that appears to have originally been a barn-style Dairy Queen.

Growing quick serve franchise Pita Mediterranean Street Food is planning to significantly expand its metro Atlanta presence.  The Mediterranean eatery, which grew from a single family restaurant in Peachtree City in 2012, today also includes locations in Newnan, Dunwoody, Roswell, Kennesaw, Columbus and Sharpsburg.  In the coming months, the  chain plans to add locations in Peachtree Corners, Johns Creek, Fayetteville, Downtown, Midtown, Covington, West Cobb and Smyrna.  In Peachtree Corners, Pita will open in Peachtree Square North near Cheeseburger Bobby's, while in Johns Creek, the restaurant will open in Johns Creek Town Center.  Pita will also open in the Avenue West Cobb and on Highway 54 in Fayetteville.  Pita locations in Covington, Midtown, Downtown and Smyrna have not been made public and / or may not yet have signed leases. This past March, Pita founder Nour Rabai told the Ledger-Enquirer  “We’re looking to do about 38 locations in the metro Atlanta market, and then we’ll be reaching to Alabama, Tennessee, South Carolina and Florida in the near future.”


Lenox Square in Buckhead is one of the first Simon Property Group malls nationwide to pilot a new parking program: MyPark.  The app based MyPark program allows customers to reserve selected parking spaces in advance of their visit.   It costs $3 for the first two hours, and $3 for each additional hour. Customers can use promo code MyPark1 for a complimentary first use. There are 31 MyPark spaces located at four locations: 2 are in the second level of the Macy's deck, one on the upper level of the Neiman Marcus deck and one in the open parking lot in front of the Fashion Cafe.

Atlanta's first Sweet Charlie’s, a hand-rolled ice cream and yogurt franchise, is set to "roll into Atlanta" on Thursday June 8th.  The shop is located adjacent to Superica in Buckhead Court on Roswell Road in north Buckhead.


Patel Brothers, a popular Indian grocery store, is planning to open a second Atlanta area location in the coming months. The new location will reportedly be in Suwanee, but an exact address has yet to be revealed.  The original Atlanta area Patel Brothers is located in a former Kroger store on Church Street in Decatur, in a shopping center known today as Patel Plaza.


Kuroshio Sushi has assumed control of Midtown's Steel Restaurant & Sushi Lounge. Located in the street level retail of the Plaza Midtown condo development, Texas-based Steel had been in business for about a decade on West Peachtree and Peachtree Place.  Locally owned Kuroshio Sushi has existing locations in Smyrna on Cobb Parkway and Kennesaw on Barrett Parkway. A restaurant representative reached by phone at the restaurant answered the phone "Steel," but says the change in ownership took place "a little while ago."  Steel continues to operate their original location in Dallas. 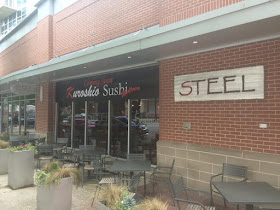 The new Publix Supermarket at Moores Mill Shopping Center is expected to open May 31st.