Loyal Tavern - originally known as Loyal Q and Brew - has closed at the Parkaire Landing Shopping Center in East Cobb.  The restaurant, which reportedly closed without notice last week, was renamed Loyal Tavern this past March after opening in August 2017 as Loyal Q and Brew.  The name change also brought a change in cuisine, dropping a barbecue focused menu in favor of a more traditional tavern menu.  Both restaurants were owned by the same group who had in years past held executive roles with Atlanta-based Taco Mac and its Tappan Street Restaurant Group. 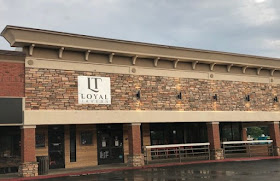 
A representative from the restaurant provided ToNeTo Atlanta the following statement regarding the closure:

"After much consideration, we have made the difficult decision to cease operations at Loyal Tavern in Marietta. It has been a pleasure to serve our friends and neighbors in the community. We appreciate all of the hard work of our team members and have offered them positions at our other restaurants. We invite our guests to visit us at our Loyal Tavern location in nearby Roswell or Loyal Q and Brew in Alpharetta to enjoy all of their favorite menu items in the future."

Ponce City Market owner Jamestown purchased Kroger-anchored Parkaire Landing in early 2018 for $42.1 million.  It's unclear what the firm's immediate plans are for the now vacant roughly 6,400 square foot Loyal Tavern space, but hopefully they are able to get something good to replace it.


Former Taco Mac executives Susan Oddo (who served as the company's President and COO from 2009-2014) and Bob Campbell, Taco Mac's founder, reunited to create Loyalty Market Concepts, owner of Loyal Q and Loyal Tavern.  The company still operates the first, and now only, locations of  Loyal Tavern in Historic Downtown Roswell and Loyal Q in Alpharetta.