There is a store that, when it opens, thousands of people descend upon its doors.

There is a company that has appeared on Fortune's annual "100 Best Companies to Work For" list every year since the list first appeared in 1998, and in 2018 was ranked No. 2  behind Salesforce.com.

There is a retailer that, despite the rise of internet shopping, still does incredibly well and continues to grow.

There is a store whose brand was used extensively in the popular NBC series "The Office."

There is a store that was named "America's Favorite Grocery Store."

Wegmans is that store... and they are coming to Atlanta!

ToNeTo Atlanta has learned that Wegmans has an LOI (letter of intent) in place for a new 80,000 square foot store in metro Atlanta. The store, which is slated for Perimeter Pointe in Sandy Springs, would be built in place of former anchors Stein Mart, Babies R Us and Michaels along Mount Vernon Highway.


Michaels relocated to the former Loehmann's in nearby Perimeter Place in 2015.  Babies R Us closed in 2018 as part of the chain's bankruptcy filing.  Last summer. the center's owner asked Stein Mart to terminate its lease early.  The early termination was due to what was described then as a planned "redevelopment."


In recent years, ToNeTo Atlanta had heard both Kroger and Whole Foods Market mentioned as having shown interest in the site.  Real estate sources tell ToNeTo Atlanta that while Kroger made some headway in their plans to open in the center, the talks with Whole Foods "never went very far."

Holiday pop-up "Santa's Fantastical" will open November 15 in the former Babies R Us and will remain in place until January 5.


If all goes well, Wegmans would open their new freestanding store in place of the three vacant anchors, a process that would, according to several real estate sources, take several months and is not yet scheduled.


For the uninitiated, Wegmans is a grocery store chain known for excellent prepared foods, a wide variety of traditional food products, extensive and high quality private label offerings, and in some locations, select hard-line goods and warehouse club sized products. 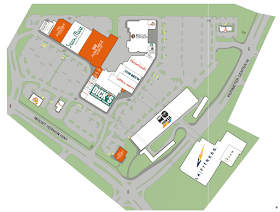 Perimeter Pointe, owned by Beachwood, Ohio-based SITE Centers Corp (fka DDR), is listed in the company's "quarterly financial supplement for the period ending September 30, 2019" as an asset slated for a "Major Redevelopment," with an expected "initial occupancy" after Q4 2020.  If this timeline holds true, the new Wegmans could open as soon as the third quarter of 2021, but possibly not until early 2022, according to sources familiar with the development.


If the planned Wegmans does come to fruition, it would join existing anchors Regal Cinemas, HomeGoods, Dick's Sporting Goods, LA Fitness, and Roam, a co-working facility.  Galla's Pizza, Happy Sumo and Chick-fil-A, among other tenants, might all need to move or relocate within the project to accommodate the new grocer.

Real estate sources tell ToNeTo Atlanta that Wegmans may be joined in the project by office and or multifamily developments.  Interestingly, Perimeter Pointe is the unnamed featured property on the SITE Centers website that is shown as one scrolls down the homepage.  As you scroll, you begin to get a sense for what the property owner may ultimately envision for the well located center.


The Wegmans and the other potential developments are all examples of  "asset intensification," or the act of increasing the density of assets (centers/projects malls, etc.), making them more attractive to tenants and customers and at the same time, unlocking more value (rent/income) for property owners.  Simon Property Group, the largest mall owner in the country, has in recent years embarked on many similar projects including their redevelopment of the former Belk at Phipps Plaza into what will ultimately become One Phipps Plaza, home to a 12-story office tower, Life Time Fitness, Nobu Hotel and restaurant, and Pinstripes bowling venue.


The SITE Centers website proudly displays the Perimeter Pointe "10 minute drive time" trade area as featuring a population of 170,000, 77,000 households, and an average household income of $116,000.  These statistics were no doubt appealing to Wegmans.


Wegmans would be the third new grocery store planned for the area.


ToNeTo Atlanta reported October 16 that a new Lidl will open in place of former Sprouts Farmers Market at the corner of Mount Vernon and Jett Ferry Roads in Dunwoody.  The anchor space, about three and a half miles from the planned Wegmans, was formerly a Harris Teeter.  Branch Properties is planning to redevelop a ten acre site it already owns along Ashford Dunwoody Road into a new mixed-use development that sources say could include a new Publix GreenWise grocery store.

While Wegmans is no doubt not looking to be the dominant grocer in the market, they could easily have their eyes on several area stores.  It's also worth noting that Wegmans has shown a willingness to open in place of former mall anchors.  The grocer replaced a string of department stores when it opened a 126,000 square foot store at the Montgomery Mall in Pennsylvania in 2013, and last year opened a mammoth 146,500 square foot store at Natick Mall in Massachusetts, where JCPenney had previously closed.


Are you excited about the planned opening of Wegmans in metro Atlanta?  Have you ever been to a Wegmans?  If so, what was your favorite offering or product?  If Wegmans does expand further in metro Atlanta, where else would you like to see them open?