A new cookie company is coming to Atlanta. Crumbl Cookies, a Utah-based franchise, is slated to open their first Atlanta area location in Alpharetta in the coming months.  The new shop, to be located in Village at Park Bridge shopping center at 4190 Old Milton Parkway, will occupy suite 2L, a roughly 1,200 square foot space most recently home to a franchise of College Nannies+Sitters. The Alpharetta location is not yet listed anywhere on the Crumbl Cookies website, but site work is well underway on renovating the space. 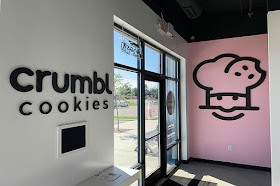 Crumbl was started by cousins and business partners Jason McGowan and Sawyer Hemsley in Logan, Utah in 2017.  The original Crumbl was located in a converted former Domino's Pizza not far Utah State University.  The owners of Crumbl later relocated their "first" store elsewhere in Logan and also began franchising in 2018.  The chain has experienced what some might consider meteoric growth with 73 locations now open in eleven states.


Almost half of the chain's franchises are in Utah and Arizona, but the company also has locations in the south in Tennessee (4) and North Carolina (1).  The upcoming Alpharetta location is reportedly one of several planned for metro Atlanta.  Another metro location is planned for a similarly sized space in the new Sandy Plains Marketplace shopping center on Sandy Plains Road in East Cobb.  Here, Crumbl will open in an outparcel building adjacent to Dogtopia in the GreenWise Market anchored center. 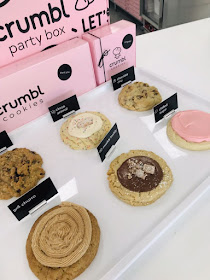 Austin, Texas-based Tiff's Treats entered the Atlanta market in Alpharetta in early 2016 with an outpost in Aspen Shopping Center at 3665 Old Milton Parkway. (The upcoming Crumbl and existing Tiff's are about one mile apart.)  The privately held company, which does not franchise, has since added six other locations to metro Atlanta, including outposts in Midtown, the Perimeter area, Cumberland, Decatur, Buckhead and Peachtree Corners.


Insomnia Cookies, another similar business, entered the Atlanta market in 2016 and now operates five locations in the state, three of which are in metro Atlanta.  Insomnia has locations in Midtown, East Atlanta and Poncey -Highland, as well as outposts in Athens and Statesboro, near UGA and Georgia Southern, respectively.


Crumbl, Tiff's and Insomnia all cater to those seeking fresh cookies delivered in quantity, whereas Atlanta's Great American Cookie Co., today owned by Global Franchise Group, is located primarily in malls and often sells cookies a few at a time or their classic cookie cakes.


Are you excited for the opening of Crumbl in Alpharetta?  Who do you think makes the best cookie in metro Atlanta?  Where would you like to see Crumbl open next in their Atlanta expansion?