After receiving inquiries from readers and witnessing ourselves the clearcutting of a large lot (2661 Briarcliff Road) behind the North Druid Hills Target store, we made it a point to investigate what was happening.  We are (dis)pleased to be able to share that the neighborhood has lost hundreds of mature trees for the development of yet another self-storage facility! 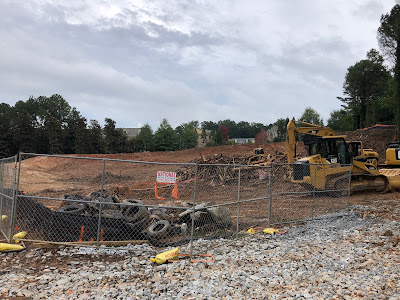 Planning documents filed with DeKalb County indicate that Extra Space Storage is building a roughly 135,000 square foot multi-level climate-controlled self-storage facility on the heavily wooded lot.  DeKalb County property records indicate that, like the adjacent Briarcliff Station shopping center and several adjacent parcels, Scarlett & Associates is the owner of the 3.63 acre parcel.  Confusingly, despite the fact that the parcel was vacant ahead of the recent clearcutting, the permit (#3053192) posted at the site indicates it's for "Alteration to existing structure."

ToNeTo Atlanta reported this past December that Related Group, a Miami-based residential developer, is proposing a roughly seven acre mixed-use development in place of Briarcliff Station, Tin Roof Cantina and other adjacent parcels.  The property, also owned by Scarlett & Associates, was targeted by Related for both annexation into the City of Brookhaven and rezoning by the city.  DeKalb County was not pleased with the request or the reported goal of receiving tax breaks from the city to complete the project, but has thus far been unable to prevent the process from moving forward.  The Brookhaven city Planning Commission recommended approval of the annexation and rezoning request on October 7 with some conditions regarding improving the streetscape around the development.  The City Council is set to vote on it October 27.

A total of 27 acres of commercial property in the area sought annexation into the City of Brookhaven, but the Extra Space property, although contiguous with others involved, was not included in the annexation request. 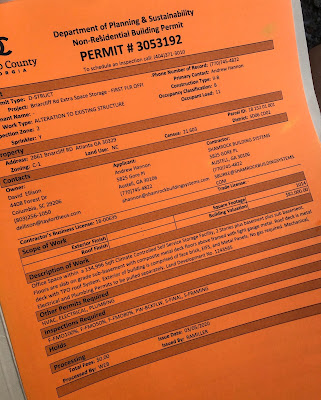 Salt Lake City-based Extra Space Storage already operates thousands of of storage units across its nearly 100 facilities in Georgia.   According to its website, "the Company's properties comprise approximately 1,010,000 units and over 585M square feet of rentable storage space."

Among the existing Extra Space locations in the vicinity are those on Zonolite Road near Sage Hill, Lindbergh Drive (on the former site of the original Varsity Jr.), on Cheshire Bridge Road (in the converted Ellman's/Service Merchandise), at Decatur Crossing across from Suburban Plaza near Decatur, and along DeKalb Industrial Way not far from the its intersection with North Decatur Road.

Extra Space (NYSE: EXR), a REIT (Real Estate Investment Trust), was added to the S&P 500 in 2016 and currently trades at about $113 per share with a market capitalization of just over $14.6 billion.  The company, which owns and/or operates over 1,850 self-storage properties in 43 states, Washington, D.C. and Puerto Rico,  is currently the second largest storage unit operator in the United States.  Public Storage, the nation's leader, owns/or operates more than 2,500 self-storage properties.

Consumer use of self storage facilities is said to be driven by the "Four D's:" dislocation (i.e., moving house), downsizing, divorce, or death.  Real estate sources and even those involved in the development of storage facilities have told ToNeTo Atlanta in recent months that demand is "softening" in metro Atlanta and that fewer new projects will be built in the near term.  This article from April indicates that the entire industry is experiencing increased unused space and decreases in monthly rental rates.

With luck, this new facility will be one of the last new locations to open by any company for a long time.

What are your thoughts on the use of this land for a self-storage facility?  Do you currently rent a storage unit?  Do you think Brookhaven should annex the 27 acres into the city?