Fifth Third Bank plans to open a new branch in Roswell.  The Cincinnati-based bank plans to convert the existing Arby's restaurant at 665 West Crossville Road into a new bank branch.  The Arby's, which closed in the Trader Joe's anchored Roswell Crossing shopping center in late 2019, originally opened in 1999.  This marks at least the second time that the bank has taken over a former quick-serve restaurant building in metro Atlanta having previously converted the one-time El Pollo Loco along Buford Highway in Chamblee into a bank.  Elsewhere in metro Atlanta, Chase converted a former Pollo Tropical in Alpharetta and a former Krispy Kreme in Doraville into bank branches, while Regions demolished a former Pollo Tropical in East Cobb to build its new branch. 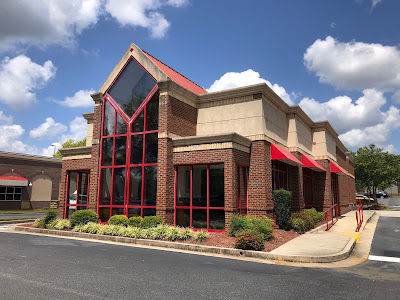 A new location of Alumni Cookie Dough is expected to open later this fall at Woodlawn Square in East Cobb.  The new edible cookie dough shop will occupy a 1,050 square foot space between Brazilian Wax Studio and Hollywood Feed in the Lidl-anchored center at 1205 Johnson Ferry Road.  Alumni founder Jennifer Dollander opened her first shop in January 2019 in downtown Athens, later opening a second location in Augusta, after which she began to franchise her business.  The East Cobb location will be the chain's first franchised unit, locally owned by husband and wife Eric and Leana Tatum.  According to the Alumni website, the East Cobb location is slated to open "late summer 2021," but from the looks of the space, that will likely turn into a fall opening.  The Alumni website also indicates another franchise is planned for "North Fulton."

Conte's Bike Shop entered the metro Atlanta market with a location in Marietta with plans to open a second location soon in Toco Hills.  In Marietta, the Virginia-based company opened August 27 along Ernest Barrett Parkway in Towne Center Prado where it occupies a 13,820 square foot space previously home to discount retailer Tuesday Morning.  A separate space in the Publix-anchored center was previously home to Performance Bicycle, but it closed when the entire chain filed for bankruptcy in 2019.  (The 8,430 square foot space is today home to locally owned Vibe Kayaks.)  Conte's space in Toco Hills shopping center will be far smaller, measuring only 3,750 square feet.  Here the bike shop will occupy a portion of what was most recently the Nearly New thrift shop of the Junior League of Atlanta.  A new Ulta Beauty, which itself is replacing a former Office Depot, is expected to open soon adjacent to Conte's.

Locally owned sandwich shop "Real Subs" has closed its original location near the corner of East-West Connector and South Cobb Drive at Olde Ivy Village.  Entrepreneur Tom Doty opened his would-be chain's first location in a 1,520 square foot space in late 2015.  A second location followed in late 2018 at the corner of Windy Hill and Atlanta Roads in phase two of  The Shops at Belmont project.  The second location, which measures 2,100 square feet, remains open.  Fellow local eatery Twisted Kitchen is expected in September to debut its third overall spot adjacent to Real Subs in a 2,400 square foot space originally home to an Uncle Maddio's Pizza franchise.

Mattress Firm has closed one of its million Atlanta area locations.  The mattress retailer in recent weeks quietly shuttered its roughly 3,200 square foot store along Sidney Marcus Boulevard in the Office Depot/Ross/Marshalls/HomeGoods-anchored Buckhead Crossing shopping center.  Mattress Firm opened their Buckhead Crossing store almost exactly ten years ago and its closure was likely the result of them not renewing their original lease.  When the retailer opened it, it replaced beloved Cuban/Caribbean eatery Coco Loco which had been a neighborhood mainstay for more than two decades.  The former Mattress Firm space is not yet being marketed for lease on the shopping center's website.

101 Bagel Cafe plans to open what will likely be its fourth location when it debuts in Dunwoody.  The new bagel shop is slated to join Harbor Freight Tools, Chili's and Wild Wing Café, among others, in Ashford Place, a neighborhood shopping center in the 4700 block of Ashford Dunwoody Road. The new café is 1,772 square feet, according to the lease plan from center owner Regency Centers.  Owner Tony Yang opened the original 101 Bagel Café in Akers Mill Square in 2018 in a space previously home to The Original Water Bagel, where Yang was a franchisee.  A second 101 Bagel opened in Duluth in 2019.  ToNeTo Atlanta reported June 22 that a third location is planned for Lower Roswell Road in East Cobb.

Take 5 Oil Change will open a new location on the site of a former McDonald's on Powers Ferry Road in East Cobb.  The new oil change facility is being built from the ground up at 1305 Powers Ferry Road.  ToNeTo Atlanta reported last August that a McDonald's franchisee abruptly shuttered their nearly 30 year old restaurant.  The building was subsequently demolished paving the way for this development.  The new Take 5 will be nearly 1,500 square feet and provide parking for 11 vehicles, according to plans reviewed by ToNeTo Atlanta.  The new East Cobb location is one of several that Take 5 has in the pipeline for the greater metro Atlanta area in the months to come.

Grand Champion BBQ locations on Shallowford Road in East Cobb and on North Marietta Parkway at the Marietta Food Market in Marietta have been rebranded as "SmokehouseQ."  A restaurant employee at SmokehouseQ indicated the change is due to the separation of former business partners Gregory Vivier and Robert Owens. (Despite the change having only recently taken place, Vivier  has had  "SmokehouseQ" registered with the Georgia Secretary of State's office since 2011.)   Vivier operates the two SmokehouseQ locations with Owens operating the two remaining Grand Champion locations on Crabapple Road in Milton and on Riverview Road in Smyrna.  The menus at the two restaurants are reportedly very similar but no longer identical.  Grand Champion previously closed locations on Canton Street in Historic Downtown Roswell and at Krog Street Market.

The Atlanta Food & Wine Festival returns to in-person events this year after taking a hiatus in 2020 due to COVID-19.  This year's festival (September 11 & 12) takes place in Historic 4th Ward Park and introduces several new events such as the "Off The Grill" barbecue competition on September 11 and "The Ultimate Sunday Tailgate" on September 12.  Additionally, the festival is hosting several "intimate brunches & dinner" in advance of and during the festival September 9-12 with dinners from Cooks & Soldiers and Lazy Betty, among others.  Use code Atlanta20 for 20% off Tasting Tent Tickets!

A new AT&T Mobility store is the first known tenant of the upcoming strip center at 1671 Howell Mill Road in West Midtown.  The property was cleared in recent years of an abandoned 98 year old church in anticipation of the planned retail development.  AT&T is expected to occupy suite 200 of the multi- suite building.
Upscale furniture, art and home goods consignment store Now & Again is moving to Sandy Springs.  Originally opened by Mary Kirchner in 1991 at 56 East Andrews Drive in the Buckhead Village, Now & Again relocated to its most recent home at 4310 Roswell Road in Chastain Park in 2011.  The new store, expected to open September 10/11, will mark the business's largest space, a nearly 8,800 square foot storefront in Centre Court, a shopping center at the corner of Sandy Springs Circle and Hammond Drive in Sandy Springs. 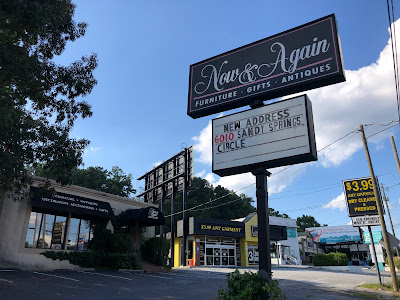 Sherrod "Pete" Patterson, champion of our site, lover of trains and beloved husband of Angie Patterson, passed away August 8 at age 64.  Born in West Palm Beach, Patterson spent the majority of his youth and early adult life in Savannah and Moultrie before relocating to Decatur.   A resident of Atlanta's Leafmore neighborhood, Patterson served as president of the Leafmore-Creek Park Hills Civic Association, not far from where ToNeTo Atlanta's founder Eli grew up.  An aficionado of southern cafeterias and a lawyer by trade, Patterson worked behind the scenes with several Atlanta area businesses including The Colonnade and The Magnolia Room Cafeteria.  Patterson, a mentor, friend, reader, and so much more, will be sorely missed by ToNeTo Atlanta and the community at large.  Those wishing to honor Pete and his contributions to our site and the community at large, may contribute to Saint Barnabas Anglican Church at 4514 Chamblee Dunwoody Road, Suite 262, Dunwoody GA 30338-6272.