Popular Cantonese eatery Canton Cook II is on the move.  The restaurant, which  is currently located in Sandy Springs, is packing up and heading to East Cobb.   Currently located in the LA Fitness-anchored Sandy Springs Crossing shopping center at the corner of Abernathy and Roswell Roads, the new outpost will be about 15 miles away. 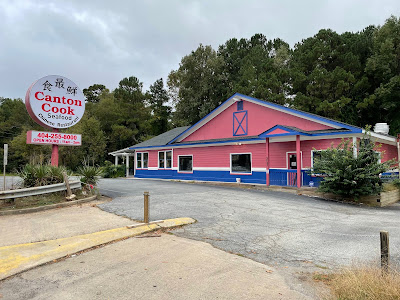 2063 Canton Road (does a more perfect street exist for their relocation?) is the address the Cantonese restaurant will soon call home, occupying the former Rib Ranch restaurant building.  The Rib Ranch closed at the end of 2017 after 35 years in business.

The new location is both freestanding and a bit bigger, (4,700 compared to 4,000 square feet), than the current restaurant.  Signage at the new restaurant also indicates that it will adopt a new name: Canton Cook Seafood Chinese Restaurant and later hours, until 2am.

Canton Cook II is an offshoot of sorts of the original restaurant, Canton Cooks, located two miles away in the Whole Foods Market-anchored Hammond Exchange shopping center at Hammond Drive and Roswell Road.  Canton Cooks opened in 1997 and serves a similar menu to its soon-to-be East Cobb relative.  The Xu brothers, Eric, William and Ming, honed their cooking and restaurant skills working for their sister Kathy at Canton Cooks before opening Canton Cook II in 2011.

Cobb County property records indicate that an entity - Pearl River Brothers LLC - registered by one of the brothers, purchased the roughly one acre former Rib Ranch property for $455K in early 2019.

The owners of Canton Cook II originally planned to be open in their new location this month, but delays have caused them to push their opening to January.

Are you a fan of Canton Cook II?  Do you prefer it or the original Canton Cooks?  What other types of restaurants would you like to see open in East Cobb?