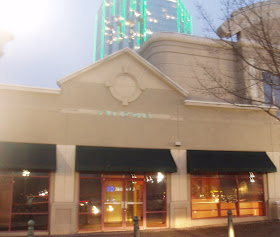 Farm Burger, which opened in Decatur last April, is now preparing to expand in Atlanta and beyond. Frequenting the restaurant, I have heard a number of potential cities of interest including Roswell and Buckhead, and also Charleston, SC and Charlotte, NC. The only location I've been able to confirm is the potential Buckhead site.
While a deal is still in the works, George Frangos and his team hope to open their Buckhead outpost in the former Atlanta Bread Co. space at Tower Walk on Piedmont. The Atlanta Bread closed last summer and has sat vacant ever since. While I'd love for Farm Burger to expand, especially in Buckhead, I have reservations about this being the best location for them.
The parking can be a challenge with a few limited (30 minute) spaces out front and only a deck for additional parking: it does not provide the right setup in my opinion. I will say that their Decatur location has challenges of its own parking wise (not enough), but its neighborhood location makes it possible for people to walk. In Decatur, it fits really well. I realize there aren't really two "Decaturs" in Atlanta and perhaps Frangos really wants to be in Buckhead, but I just hope there are other location possibilities. While Another Broken Egg Cafe just announced that it was taking the former Savor Specialty Foods in Peachtree Battle, I see that area as being a better fit if something becomes available.
Some information, breaking news and industry scoop is only disseminated via my Twitter and Facebook accounts so "follow" and "like" me so is not to miss a beat!
Atlantan99
Share