Not Too Much To Say : Krystal Too Should Never Have Opened 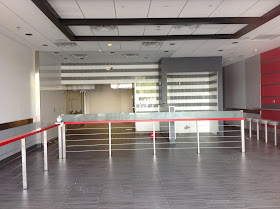 Chattanooga, Tennessee-based Krystal has closed its Krystal Too restaurant in Tucker just six months after opening.  The inline concept eatery was located in Northlake Square shoppingcenter in a former coffee shop.  Located in the middle of the center, the restaurant was without a drive-thru, something that undoubtedly contributed to its failure.  I wrote about the new location this past February and the ToNeTo Atlanta site exploded with comments and opinions about the restaurant, with many readers questioning their location choice and predicting its demise.

As you can see from the photo, the restaurant has already been stripped of all equipment and had its signage removed.  Sources say the restaurant closed sometime last week and the building was cleared out earlier this week.

According to Brad Wahl, vice president of marketing for Krystal, A typical Krystal restaurant derives 70% of its business from the drive-thru so to open without one seemed odd.  A typical fast food restaurant drive-thru accounts for about 50% of revenue, making the Krystal drive-thru even more important.

The Northlake area has seen a number of new food options sprout up in the past year or so, including a new freestanding Chick-fil-A that replaced an abandoned Taco Bell, and a free standing Chipotle Mexican Grill that replaced a Pizza Hut (Pizza Hut opened a take-out only location not far away.)  Additionally, Panda Express opened a new free standing restaurant along LaVista Road in front of Michael's, and Fork in The Road will soon open in Northlake Mall in the former Ruby Tuesday/Crescent Moon space.

An abandoned Fuddruckers restaurant is also finally showing signs of change, and has been stripped it its core to make way for renovations that will turn it into Resurgens Bank.

Interestingly, a Captain D's restaurant that I recall having been on Montreal Road near LaVista Road for the better portion of my life continues to draw a decent lunch business, although it benefits from a drive-thru.

Krystal opened a second Krystal Too location in Soddy-Daisy, Tennessee in late April, but it appears that store closed as well.  Searching the Krystal website for either location returns the correct addresses and refers to them as "Too" locations but their respective phone numbers have been replaced with a series of zeros, rather than an actual phone number.

Both locations were lacking drive-thrus and also lacked some of the typical menu items found in larger stand alone Krystal restaurants.  Larger burgers and all breakfast offerings were not offered at the Krystal Too, further limiting their appeal.

Also, it's worth noting that in the case of the Tennessee location, Krystal opened in a space that, according to locals, has contained nearly a half dozen other failed restaurants, including at least a couple of pizza joints.

Krystal opened another concept called "K Cafe" in Alpharetta in late 2010 and by early 2011, it too had closed.  The concept was designed to be a littler higher end than a typical Krystal and was perhaps trying to take market share from fast casual burger concepts like The Counter.

The company, which dates back to 1932, was purchased by Atlanta-based Argonne Capital in late March for an undisclosed sum.  Currently the restaurant has over 350 locations across ten states.