Taqueria Tsunami Wipes Out In Buckhead ... 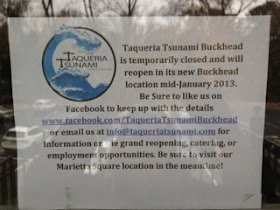 
Atlanta-based Taqueria Tsunami, the Latin-Asian Kitchen, opened their first restaurant in South Buckhead in July 2011 and later added a second location in Marietta Square in November of the same year.

Chef-owner Scott Kinsey is a former corporate chef for Romano's Macaroni Grill who was later with Atlanta-based Hooter's of America prior to opening the first Tsunami eatery.

The south Buckhead location at 2293 Peachtree was for many years home to Toulouse, a French eatery.  The restaurant space is easily one of the worst along Peachtree, with limited visibility, signage and parking.  Taqueria Tsunami, was a late addition to last year's end of year DeathWatch.  On November 28th, I predicted that they would be closed within 12 months and sure enough, about a year later, they have closed.

A sign posted on the restaurant's door indicates they will reopen in mid January 2013, but I'd wager that not yet having a new location secured would prevent them from reopening that soon.

The restaurant's website lists a new location coming soon to The (Outlet) Shoppes of Atlanta in Woodstock, the new outlet center that broke ground earlier this year.  Supposedly the Woodstock location will open in August, making it a little strange that the Buckhead location was not listed at all, if it's to reopen in January.

Kinsey spoke with Nation's Restaurant News ( NRN ) earlier this year and said that the Buckhead and Marietta locations were "both doing well financially and critically," and we'd be open to franchising once "we have all of our ducks in a row." Currently there is a franchise option on the restaurant's website despite what appears to be a concept with ducks not yet in a row.

Had you made it in to this location?  Do you like the concept?  What would do well in what seems to be a rather hidden restaurant space? Weigh in below.
Atlantan99
Share