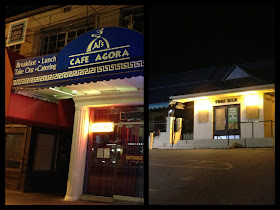 Al's Cafe Agora plans to expand and relocate in Buckhead


Al's Cafe Agora will finally expand in Buckhead, but not in the space previously announced.  Al Ozelci, proprietor of the popular Mediterranean eatery on East Paces, previously planned to expand to the closed (and now relocated) Park Bench, but has opted instead to open in the former Thai Silk restaurant space not far away.

I'm a frequent customer of Agora, but finding parking near the restaurant has become increasingly difficult.  Guests of Agora used to be able to park streetside for either quick pick-ups or short meals, but After PARKatlanta (A.P.A.) this is no longer a feasible option.  Another previous option was to park in the former Hi-Fi Buys parking lot.  This parking was tight, but close, and Al had a number of spaces allotted to his restaurant.  The combination of the weekend popularity of Buckhead Bottle Bar (Al's neighboring business) and OliverMcMillan's decision to cordon off a portion of the lot have made even this parking option difficult.

Citing parking issues as his main concern, Al has purchased the former Rama 5 / Thai Silk, and will renovate the space over the next few months.  Thai Silk closed  at the end of September after a series of missteps.    Al tells me seating will increase from about 35 to 150 and he will have up to 40 parking spaces.  Al has frequently had requests for private dining, which he will now be able to offer in the new location.  Oftentimes I have taken advantage of the al fresco seating in front of Al's.  The new restaurant (as shown to the left in the photo) will offer a covered patio with outdoor seating.

Al's Cafe Agora first opened in Buckhead in 2005, and earlier this year added a second location in Midtown, at 92 Peachtree Place.   Al hopes to have the new Agora Buckhead opened in mid to late March.

Do you think Al's will loose some of its when the restaurants moves to the larger digs?  Have you never heard of Al's and are looking forward to checking it out?  When do you think Buckhead Atlanta will be completed?  Please weigh in below.
Atlantan99
Share