A new RaceTrac that ToNeTo Atlanta first got wind of in 2017 is finally officially official and is expected to open this summer.  The new location, unlike any other that the Atlanta based company operates, will be on the ground floor of a mixed-use development, and will only have four fueling stations, eight pumps.  RaceTrac supplied never before seen renderings of the upcoming location exclusively to readers of Tomorrow's News Today- Atlanta. 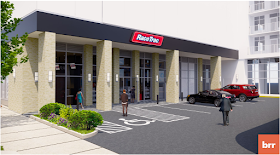 The new RaceTrac is opening as part of the new student housing development under construction at the corner of John Wesley Dobbs and Piedmont Avenues in Downtown Atlanta.  The 26 story project, being developed by Atlanta based South City Partners, is expected to bring 235 units with some 650 beds to the site of a former Shell gas station, as well as an old dialysis clinic on a roughly one acre parcel.


South City Partners describes themselves as "a fully integrated multi-family development company." Launched in 2011, South City was a partner in the Inman Quarter development and has a number of other multifamily projects underway or planned in metro Atlanta including one in Avondale Estates and another in Alpharetta. 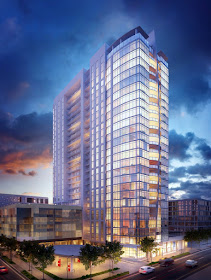 
The convenience store component of the RaceTrac will be 4,000 square feet and will provide all of the offerings for which RaceTrac is known, including a Swirl World frozen dessert station with up to 10 flavors and 41 toppings and a large coffee area with freshly ground, freshly brewed coffee. Guests can look forward to a clean, well-lit store, starkly different from the Shell station before it.  The store will also have free Wi-Fi and a more shoppable layout to deliver a better guest experience.

A RaceTrac representative indicated that "this is not the smallest location RaceTrac has built in recent years, but this is the first within a mixed-use development."  The representative further added "This is a unique opportunity for RaceTrac, as it is in a dense, urban area and is our first non-traditional brick and mortar store." 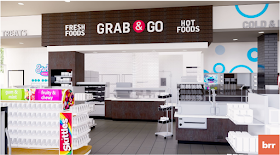 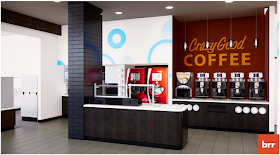 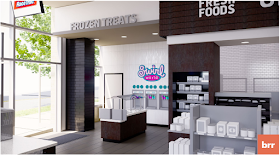 The store is located across the street from University Commons, a 4.2 acre development of four apartment buildings ranging from eight to 15 stories, housing approximately 2,000 Georgia State University (GSU) students.  Multiple other GSU-run and privately run student housing developments are located nearby as is GSU's main campus.


A listing from Ackerman & Co., the company handling the retail leasing for the new development, indicates that there are a roughly 1,600 and roughly 2,400 space still available for lease.


Not far from the South City project, a second gas-less QuikTrip was to open at the corner of Andrew Young International Boulevard and Peachtree Street, but the deal never materialized.  The site, once home to Planet Hollywood, is currently under renovation to open soon as Atlanta's second Wahlburgers restaurant.  The proposed QuikTrip convenience store would have opened in addition to the burger eatery.  The company continues to operate what has proven to be a popular convenience store sans gas location on Peachtree Street in Midtown, which opened in 2016.


RaceTrac representatives indicate that they plan to be open in August and the housing portion reportedly expected to be completed in July with move-ins planned for early August.