[EXCLUSIVE] Under Armour to Pop Up at Lenox Square

A new Under Armour store is expected to open this coming Monday, May 6 at Lenox Square in Buckhead.  The store, located on the mall's second floor near Godiva, is opening in a space that was for a while Brookstone [before their bankruptcy led to the closure of the Lenox store and others], but was most recently a tech store called "Broadcast Hub." 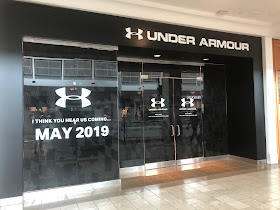 Sources close to the athletic apparel retailer indicate that the company signed short term (six month) lease to "test the market," and that if the test is successful, the store could become permanent, either in its current location or elsewhere within the mall.


Kevin Plank launched the Under Armour brand in 1996 and the company's first retail store opened in 2007 at Westfield Annapolis, a mall in Annapolis, Maryland not far from Under Armour's Baltimore headquarters.  The Under Armour store at Lenox Square would be the brand's first "Brand House" [full line store] in the state, but the company already operates five "Factory House" stores in Georgia.  The "Factory House" stores are outlet stores, and current Georgia locations include Tanger Outlet centers in Commerce, Locust Grove and Pooler (near Savannah), as well as at North Georgia Premium Outlets in Dawsonville and The Outlet Shoppes at Atlanta in Woodstock.

At Lenox Square, Under Armour joins existing athletic apparel retailers such as Nike, which operates a two level, approximately 23,000 square foot store at the front of the mall, and Adidas, which is expected to debut a new, larger store on the first floor near Nike later this month.  Both Reebok and Puma have previously operated stores at Lenox Square in years past.


Last week, Under Armour (NYSE:UAA) reported first-quarter results that topped expectations for earnings and revenue. The company also raised its full-year forecast, noting that international revenue grew 12%.  The positive news continued the company's rally that has seen its shares increase more than 30% this year, outpacing the broader market’s 16% gain.

ToNeTo Atlanta has visited the Under Armour store in Annapolis and has in the past suggested that an outpost of the retailer would make sense at Lenox Square.  It's nice to see that our foreshadowing is now becoming reality.


What retailer would you like most to see open at Lenox Square?  What is your favorite athletic apparel company? Are you excited for the opening of Under Armour at Lenox Square?