A new location of popular food truck turned restaurant Yumbii is planned for Toco Hills.  The new restaurant will occupy  a currently vacant, roughly 2,300 square foot corner space in the sprawling neighborhood center.  Electronics retailer Radio Shack occupied the spot for more than fifteen years before it closed, along with hundreds of other locations nationwide, in 2017.  In the 90s the space was home to Backtracks, a popular used media store that focused primarily on CDs and DVDs. 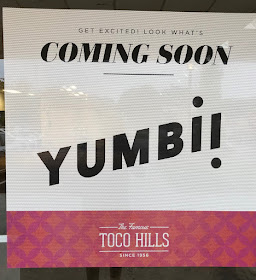 Sources tell ToNeTo Atlanta that plans for the new Yumbii include punching a doorway in the side wall to provide access to the underutilized patio once home to Atlanta favorite Gorin's.  Young Chefs Academy had operated out of the Gorin's space until 2017, when they relocated to Howell Mill Village, but the patio has not been used for outdoor dining since Gorin's closure more than a dozen years ago.


If all goes well, Yumbii Toco Hills should open late this year.


Atlanta native Carson Young started Yumbii, which specializes in Asian + Mexican fare, as a food truck in 2010, before its success warranted a brick & mortar location at South Buckhead's Brookwood Village shopping center in 2017.  The Brookwood Village location, which measures 1,442 square feet, proved the concept could thrive in an actual space. ToNeTo Atlanta exclusively shared this past January that a second Yumbii was planned for the renovated Chamblee Plaza along Peachtree Boulevard in Chamblee, but we have now learned that the plans fell through and that Toco Hills will be instead of, rather than in addition to, the Chamblee location.


Yumbii is the latest new restaurant to be added to the lineup at Toco Hills, where in recent months and years Kale Me Crazy, Spiller Park Coffee, Chopt, The Local Pizzaiolo and most recently, Pao Pao Ramen and Rolled Ice Cream have all opened.  A previously announced Hudson Grille restaurant that was to open in place of former longtime tenant Famous Pub failed to materialize, while a Flying Biscuit Cafe is expected to open later this summer in the remaining portion of the former Petite Auberge French restaurant.