Several Atlanta area Pizza Hut restaurants have closed in recent days following the July 1 Chapter 11 bankruptcy of NPC International, one of the company's largest franchisees.  At the time of their filing, NPC operated some 1,200 Pizza Hut locations of which about 40% were the brand's legacy "red roof" [hut] locations.  NPC indicated in August it planned to close as many as 300 "underperforming" units of which most would likely be the company's freestanding "hut" units. 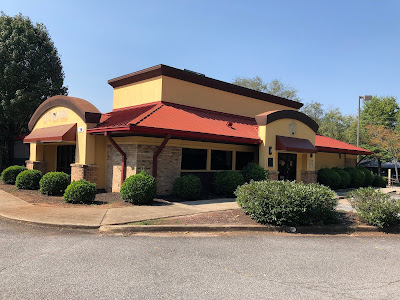 Leawood, Kansas-based NPC became a significant Wendy's franchisee in 2013 and today operates nearly 400 units of the popular burger franchise.  The company indicated in its filing it has no plans to close any of its Wendy's.

The Pizza Hut website indicates that there are 262 Pizza Hut restaurants in Georgia, making the Peach state the company's fifth largest market by unit count.  Texas is the chain's largest domestic market with 806 units, followed by California with 573, Florida with 473, and Ohio with 301. North Carolina was just behind Georgia with 255.  That said, the unit counts seem to not yet reflect recent closures.  ToNeTo Atlanta's review of the Pizza Hut website reveals that at least a dozen restaurants listed are now, in fact, permanently closed.

The closures include at least ten "hut" units including those at 241 South Main Street in Alpharetta, 4421 Hugh Howell Road in Tucker and 1525 Buford Highway in Buford, among others.  All three of the aforementioned closures included the WingStreet restaurants that operated within the Pizza Hut restaurants.

The Alpharetta closure comes on the heels of other recent quick-serve closures in the area including both Hardee's and Burger King, which closed this summer.  We are unaware of any interest/activity yet in either of the former burger buildings but it's worth mentioning that KFC, like Pizza Hut, a fellow Yum! Brands concept, previously closed its South Main Street location and it reopened in late 2013 as Salt Factory Pub, a popular gastropub from local operators F&H Food Trading Group. 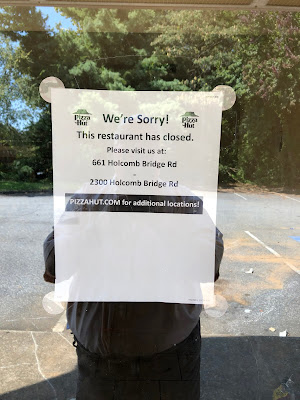 Metro Atlanta (and the country) is already littered with  dozens of UTBAPH (Used To Be A Pizza Hut) locations.  Notable UTBAPHs in metro Atlanta include DAS BBQ on Collier Road in Atlanta and Chipotle Mexican Grill on Henderson Mill Road in Tucker.

In Georgia, this latest round of closures include the following newly minted UTBAPHs: 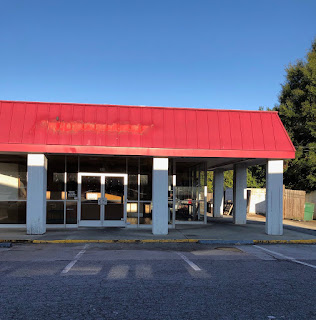 What is your favorite quick-serve pizza place?  Are you surprised to see so many Pizza Hut restaurants close?  What would you like to see open in place of the new UTBAPH units in metro Atlanta?