A new-to-market stir-fry concept has chosen Sandy Springs to make their Atlanta area debut.  A franchise of Whealthy, a concept based in Irvine, California, has leased the former Firehouse Subs in Sandy Springs Plaza at 6277 Roswell Road. The Firehouse Subs franchise closed abruptly this past January.  The nearly 1,300 square foot space is adjacent to Willy's Mexicana Grill, on the north end of the Trader Joe's anchored shopping center. 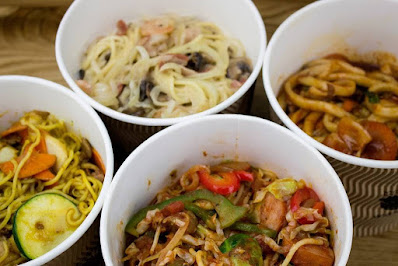 "Whealthy is customizable fusion grilling in our innovative rotating fire pots. Our customers assemble their own creation selecting from a variety of fresh vegetables, proteins, and noodles or rice. Masterfully flavored with one of our many unique sauces, our chefs will make your creation come to life in our open kitchen."

If Whealthy sounds familiar, it should.  The premise at Whealthy is strikingly similar to Urban Wok, another new-to-market franchise that ToNeTo Atlanta was first on September 5 to report was also entering the Atlanta market.  The restaurant, coming soon to TOWN Brookhaven, is also about 1,300 square feet and opens where Olive Bistro previously closed.

There are currently three Whealthy units open in southern California with a fourth coming soon to Tustin, in the greater Los Angeles area in Orange County.  The first Whealthy opened in March 2017 in West Hollywood, followed by the launch of Urban Wok in St. Paul, Minnesota in October 2018.

Sources close to Whealthy indicate there are plans for three to five more units in the Atlanta market in the coming months/years.

Are you familiar with Whealthy?  Does the premise of Whealthy sound appealing to you? Where else in metro Atlanta would you like to see Whealthy open?