After hearing rumblings of it for the better part of a year, we can now confirm that a new location of Antico Pizza Napoletana is destined for Tucker!  The new restaurant, a sibling of the original in Atlanta near Georgia Tech, will join Publix in the new Hugh Howell Marketplace project currently under construction at the corner of Mountain Industrial Boulevard and Hugh Howell Road on a portion of the old Sears property. 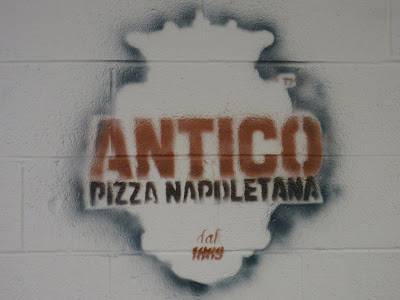 ToNeTo Atlanta reported in June that Publix expects to open in November and it's believed that many of the smaller tenants, Antico included, are also planning to open around the same time.

The new Antico Pizza will be the fourth standard location for the popular eatery joining existing outposts in Home Park, The Battery Atlanta and Avalon in Alpharetta.  While some might wonder what made Tucker deserving of an Antico of their own, a little digging provides an easy explanation as to what brought them to the upcoming Branch Properties development.

Antico Pizza Tucker, LLC was registered June 9 with the Georgia Secretary of State's office.  The "Registered Agent" was Nicholas B. Telesca, listed with an address at 3340 Peachtree Road, Suite 2775.  Also at that same address is the headquarters of Branch Properties, where Nicholas B. Telesca is Partner and President of the real estate firm.  Further research reveals that Telesca is the "Registered Agent" for Antico's other Atlanta area restaurants as well as his ill-fated entry into Miami.

This article from 2015 lists Telesca as Antico founder Giovanni Di Palma's "partner," which suggests that he is more than just the restaurant's "Registered Agent," that he is a partner in not just the Tucker location, but the overall business.
As for who else might be joining Antico and Publix in the new center, site plans and sources suggest there are several other regional and national chains interested in space in the center but the only other confirmed deal is for a freestanding Chase Bank, woohoo!
Are you excited at the prospect of Antico Pizza opening in Tucker?  What other types of shops or restaurants would you like to see open in Hugh Howell Marketplace?  What would you like to see open in the soon to be former Publix at The Centre on Hugh Howell?
Please share your thoughts below.
Atlantan99
Share