Chick-fil-A, the Atlanta-based chicken chain that saw its restaurants ring up a reported $13.7 billion in sales in 2020, is again looking to better position itself for continued growth.  ToNeTo Atlanta has since 2017 reported on more than a dozen "scrape & rebuilds," relocations and new restaurants for the quick-serve chain.  We have now identified another planned relocation that company has in its metro Atlanta pipeline. 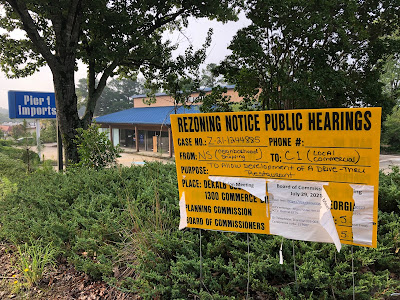 Several years ago, Chick-fil-A reportedly tried to acquire what was then a shuttered Checkers restaurant adjacent to its current DTO location.  Their efforts were unsuccessful and the Checkers was later renovated and reopened under new ownership.  Additionally, Chick-fil-A has been closing mall-based units: Northlake, Gwinnett Place and North DeKalb Mall locations among them, which has no doubt pushed business that might previously have been in the mall to the accompanying freestanding Chick-fil-A restaurants surrounding the malls.

It's no secret that Chick-fil-A restaurants are among the most productive quick-serve chains with average unit volumes of about $6 million, according to sources familiar with the restaurant's performance.  To keep up with demand, Chick-fil-A is constantly looking to optimize its real estate portfolio to create and operate the most efficient restaurants that it can.

Are you pleased to hear that Chick-fil-A plans to replace their existing DTO location with a full service restaurant?  Were you hoping for a Whataburger on the Pier 1 site?  What is your favorite fast food chain?