Tecovas, a new boot brand born online and now growing its retail footprint, will bring one of its newest stores to Buckhead!  Recently installed signage indicates that Tecovas will open at The Shops Around Lenox between CorePower Yoga and lululemon.  The boot company will backfill a roughly 2,600 square foot space vacated last year by stationery and cards retailer Paper Source following their Chapter 11 bankruptcy filing. 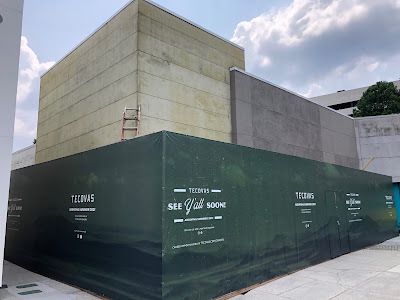 Established by millennial former consultant Paul Hendrick in 2015, Tecovas started as an online direct-to-consumer business, but eventually opened their first retail store in Austin in 2019.  In the years since, the company has added eight more stores in Texas, as well as a total of eight more in other markets including recent entries into Birmingham, Charlotte and Nashville, among others.  Other than Texas, no state has more than one store yet.

The brand got its name from the Tecovas Formation in west Texas, a beautiful geographical feature in the Palo Duro Canyon.  "We strive to make products as beautiful and timeless as the natural beauty of our home state." says the company on its website.

When the company started, Tecovas focused exclusively on cowboy boots.  As the company grew, the product lines did too, becoming the "lifestyle brand" that it is today, with not only cowboy boots for men and women, but also denim clothing, bags, belts, hats and even dog leashes, among other clothing and accessories.  [Drinkware and cooler company YETI has also morphed into a budding lifestyle brand with a staggering amount of apparel and other non-typical merchandise.]

Tecovas cowboy boots are designed in Austin and crafted in Leon, Mexico, in one of the oldest bootmaking factories in the world.  Most men’s boots range from $215 to $695 a pair, and women’s cost from $225 to $395.  The Marshall, the one outlier for the brand's men's boot offerings, features Full Nile Crocodile and retails for $1,495.

Some call Tecovas the "Warby Parker of boots" and Tecovas seems to be following the eyewear retailer's lead in their omnichannel efforts.  Warby Parker started in 2010 and opened its first retail store in 2013.  Today there are about 140 stores with plans to open another three dozen in 2021.  In metro Atlanta the company operates three stores: Buckhead Village District, Westside Provisions and their newest, at Perimeter Mall in Dunwoody, which opened this past March.  While there is no doubt a smaller market for several hundred dollar cowboy boots than their is for hundred dollar glasses, Tecovas has clearly identified the need for a brick and mortar presence.

In their own words, Tecovas said of their decision to open retail stores: "We're opening our own stores because they will allow us to continue to expand the customer experience without sacrificing our core business model - and so we can meet y'all in person!" 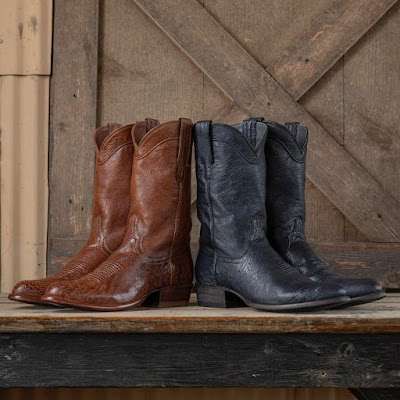 The decision by Tecovas to open at the Shops Around Lenox in Buckhead and not at Ponce City Market, Westside Provisons, Buckhead Village District, Avalon, or one the many other "trendy" locations around town is a bit perplexing until you consider what it's getting.  Situated adjacent to the state's largest and best performing lululemon could be likened to being located next to a large Apple store.  Also, as a center, Shops Around Lenox is well merchandised with a highly curated mix of local and national restaurants and retailers including fellow online-born brands Framebridge (framing) and INDOCHINO (suiting).

Another factor that may have contributed to the company's decision to open in Buckhead is the recent closure of fellow boot retailer The Fry Company at Ponce City Market.  South Moon Under, a primarily women's clothing and accessories retailer that remains open at Shops Around Lenox, also closed its store at Ponce City Market (PCM).

Signage at the new Tecovas space indicates the store is to open "Summer 2021" but with no permits filed with the City of Atlanta yet, that timeline may be quite aspirational.

Are you familiar with Tecovas?  What do you think of Tecovas' decision to open in Buckhead versus elsewhere in Atlanta?  What other online born brand would you like to see open a store in metro Atlanta?