Move over Five Guys and Steak & Shake, a new burger franchise is coming to town and its bringing a drive-thru with it!  Fast-casual restaurant MOOYAH Burgers, Fries & Shakes plans to open their first in Atlanta, and one of their first ever drive-thru enabled locations late this year in Mableton.  The new restaurant will open at The Walk at Legacy, the retail portion of the Legacy at the River Line housing development, at the corner of Veterans Memorial Highway and Discovery Boulevard in Cobb County.  Mooyah will occupy a roughly 2,400 square foot endcap space with an existing drive-thru lane. 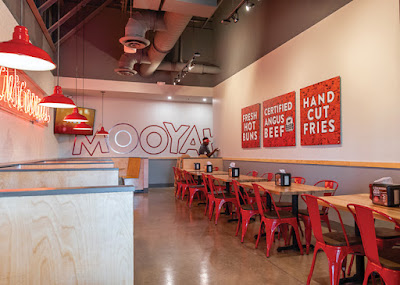 Mooyah's menu, as its name suggests, is centered on burgers, fries and shakes with the restaurant's buns baked in house daily.  The restaurant's burgers are primarily certified Angus beef, with other options also available such as Jennie-O Turkey burgers and Dr. Praeger's black bean vegan burgers.  The restaurant also offers Hebrew National hot dogs and hand-cut french fries along with a half dozen or so milkshakes.  Most burgers cost about 10 bucks and shakes 5 bucks.

Established in Plano, Texas in 2007, Mooyah grew to more than 100 locations by 2016.  By 2019, however, the store count had fallen to about 80 units, a drop then newly hired CEO Tony Darden blamed on "overeager franchising" teamed with a franchise support system that wasn’t robust enough for the chain’s size.  The franchise is in growth mode again, albeit with a new, more measured expansion in mind.  [Darden left MOOYAH in June to become Chief Operating Officer at Jack in the Box.]

In early 2020, the company figured drive-thrus were a 2022 project or beyond.  The pandemic accelerated those plans and the company spent much of the latter portion of 2020 fine tuning their operation and creating efficiencies to expedite service time.  Mooyah hired Livit, a design firm based in Madrid, Spain, to create a prototype restaurant that is now serving as the model for both new unit development and updates to existing restaurants.

Fellow "better burger" concept Shake Shack is also getting into the drive-thru game and plans to open one of its first drive-thru units in Alpharetta.

Mooyah last year opened new franchised locations in Orlando, Florida and Hoover, Alabama, both of which debuted the brand's new design and interior layout.  The company has said it plans to open three new drive-thru enabled locations among a dozen or so it plans to open in 2021.

Have you ever been to a Mooyah Burgers, Fries & Shakes?  What is your favorite quick serve burger joint?  Where else would you like to see Mooyah open in the greater metro Atlanta area?