[UPDATE] Chick-fil-A is Moving to "Holy" Land in Marietta

Chick-fil-A continues its push to renovate and/or rebuild many of their freestanding Atlanta area restaurants.  ToNeTo Atlanta has previously reported on renovations of the chain's Marietta and Smyrna restaurants as well as complete rebuilds of more than a dozen others.  The latest outpost slated for replacement is the Chick-fil-A at Marietta Trade Center (170 South Cobb Parkway), not far from The Big Chicken.  Here, Chick-fil-A will fly the coop and reopen about a half mile away in an outparcel of the onetime Kmart turned American Freight Appliance-anchored center near the corner of Roswell Road and Cobb Parkway. 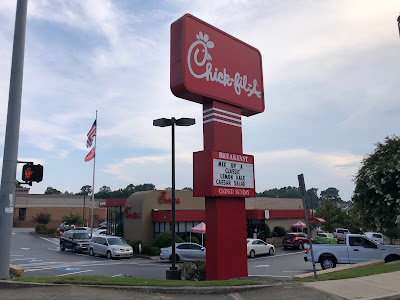 Cobb County planning documents suggest that the new Chick-fil-A will be similar in size to the existing circa 1988 unit with each at about 5,000 square feet.  The new location will, however, feature twin drive-thru lanes to ease congestion and create efficiency.  Underground storage, common in the Chick-fil-A restaurants of the 80s, is absent in the new locations, with all storage either attached or adjacent to the restaurant.

Chick-fil-A has in recent years completed several "scrape & rebuild" projects in Cobb County, where it opens a new restaurant on the site of an older restaurant.  These projects, which typically take about four to six months, have been completed on Windy Hill Road, Cobb Parkway (Akers Mill), South Cobb Drive,  Johnson Ferry Road and most recently, on Ernest Barrett Parkway in Kennesaw, which reopened August 5 after having closed February 19.

This past October, Chick-fil-A debuted the results of their "modular construction" efforts with the reopening of their Roswell Town Center restaurant on Holcomb Bridge Road in Roswell.  The 80s era restaurant closed July 10, 2020 and reopened October 15, 2020, marking a significant reduction of the construction timeline achieved with the offsite prefabrication of certain building sections.

Chick-fil-A indicated the modular building program could reduce construction schedules by six to ten weeks.  It's unclear if the program is being used in Marietta, but given that the company does not have a demolition to plan around, it's conceivable that the program could be put to work with an even shorter timeframe.

Are you excited for the planned relocation of the Marietta Chick-fil-A?  What is your favorite Chick-fil-A menu item?  What would you like to see open in place of the soon-to-be vacated Chick-fil-A at Marietta Town Center?