Red Phone Booth plans to hold its grand opening this coming Friday, August 13.  The new Buckhead outpost is the sibling of the Downtown location by the same name.  "Fitting of a 1920s inspired speakeasy, Red Phone Booth is unbeknownst to passersby, with only an antique London red phone booth to mark its location. While the phone booth is operational, members and their guests know that dialing a secret phone number provides access to the clandestine cocktail bar and cigar lounge."  The nearly 7,000 square foot space features a 24 foot-long walk-in humidor, nearly 50 pages of cocktails and a state-of-the-art air filtration system. 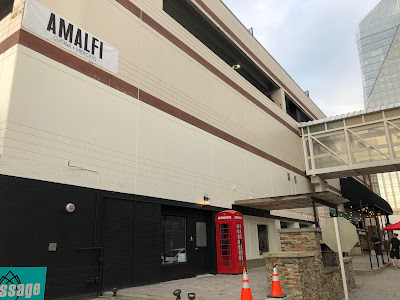 Amalfi cucina+mercato, which is opening adjacent to the Red Phone Booth, takes the remaining portion of the former Gordon Biersch brewery & restaurant and is slated to open in early September.  The restaurant will, like Red Phone Booth, be similar to its downtown sibling with the addition of a smaller market offering Italian beer, wine, olive oil and other items, as well as the restaurant's popular Neapolitan pizza.  ToNeTo Atlanta exclusively reported on the plans for both openings March 2020 but they were delayed, like so much in this world, by COVID-19.

Freddy's Frozen Custard & Steakburgers plans to open their latest metro Atlanta location August 8 15 at 2716 Sandy Plains Road in East Cobb.  The new restaurant, built on the site of a former Burger King, was originally to be renovated, but the decision was later made to start from scratch. Wichita, Kansas-based Freddy's entered the Atlanta market in 2014 with a restaurant at the sprawling South Point development in McDonough, and today operates fifteen locations in the state including outposts in Snellville, Duluth, Kennesaw and Newnan, among others.  In addition to the Sandy Plains location, another new Freddy's is "coming soon" to 4245 U.S. 78 in Loganville.

A new cookie company is coming to Atlanta. Crumbl Cookies, a Utah-based franchise, is slated to open their first intown Atlanta area location in Brookhaven.  The new shop, to be located in TOWN Brookhaven, 4330 Peachtree Road, will occupy suite 1035, a 1,600 square foot space most recently home to a franchise of Which Wich?.  The growing cookie franchise entered the Atlanta market last year with an Alpharetta location and has since opened additional units in Cumming and Marietta.  A new Crumbl is also slated to open soon in Lawrenceville.   The first Crumbl opened in a converted former Dominos in 2017.  Crumbl has since expanded to 250 locations nationwide.  According to a Crumbl representative, the new Brookhaven store will open the week of October 11.

Iron Hill Brewery & Restaurant officially opened their latest outpost Monday August 2 in Dunwoody.  The new restaurant, located along Hammond Drive in the bottom of the Twelve24 skyscraper, marks the second location in Atlanta for the Exton, Pennsylvania-based chain which debuted in Buckhead's Lenox Marketplace last December.  The Dunwoody restaurant is the 20th overall for the group.  "We had a goal of operating 20 locations by the end of 2020, and while we’re a little bit delayed due to the pandemic, we are achieving that goal today."

Tuk Tuk Thai Food Loft closed Sunday August 8 for what the restaurant's owners indicate will be a three to four week renovation.  The restaurant, located on the second floor of the Brookwood Place development, opened in late 2009 and is the sibling restaurant of Nan Thai Fine Dining and Chai Yo Modern Thai, both of which remain open and will serve select  favorites from the Tuk Tuk  menu during the renovation.  According to the Tuk Tuk website, planned improvements include updating the kitchen and remodeling the interior.  Tuk Tuk plans to reopen in September.

Regions Bank plans to relocate its existing branch from the corner of Roswell and Abernathy Roads in Abernathy Square to a former BB&T in an outparcel of the Lidl-anchored City Center Crossing shopping center a little less than a mile away.  The former BB&T was left vacant following the bank's merger with SunTrust and subsequent consolidation with the existing SunTrust at the corner of Johnson Ferry and Roswell Road.  Sources indicate that the move will take place towards the end of the year and that there are several possibilities being considered for the high profile, roughly 5,500 square foot endcap location in the Publix-anchored center than Regions is vacating.

ServiceMaster Brands (SMB), Tuesday, completed its acquisition of Two Men and a Truck®/International, Inc. (TMTI) which claims to be "the fastest-growing franchised moving company in the U.S." ServiceMaster Brands is a division of Atlanta-based Roark Capital whose holdings include more than fifty franchise brands including Arby's, Dunkin', Moe's Southwest Grill, Massage Envy, Merry Maids, Pet Supermarket, Waxing The City, Take 5 Oil Change and Primrose Schools, among others.

Surina Thai is now open at Magnum Plaza at 2390 Chamblee Tucker Road in Chamblee.  The new Thai restaurant replaced Vienamese eatery Chom Chom in the newish center across from DeKalb-Peachtree Airport (PDK).  Surina Thai features a wide variety of curries, salads, noodle and rice dishes, as well as classic soups and starters.   The casual but full service restaurant is open for lunch and dinner seven days a week from 11 am until 10 pm.

A new Crunch Fitness is coming to West Cobb.  The new fitness club will open in place of the former Stein Mart in the Parkside West Cobb shopping center at 3805 Dallas Highway in Marietta.  The 32,000 square foot space was made available last year by the bankruptcy and eventual closure of all Stein Mart stores nationwide.  Crunch itself has had struggles in its past, such as its 2009 chapter 11 bankruptcy filing, but after several ownership and management changes, is in growth mode again via its revamped franchising model.  There are currently five Crunch locations opening in metro Atlanta, with an additional unit in the works for Buford near the Mall of Georgia.  In addition to the new Crunch in Parkside, Chicken Salad Chick is replacing a former Zoës Kitchen as ToNeTo Atlanta reported in May.

A new location of North Salt Lake, Utah-based Uptown Cheapskate is coming soon to Marietta.  The new store, the company's twelfth in the state, is opening in the Kroger anchored Parkaire Landing shopping center along Johnson Ferry Road in East Cobb.  Uptown, like competitor Plato's Closet, buys and sells gently used, primarily teen and young adult clothing, shoes and accessories.  The franchise currently operates several Atlanta area locations including those in Kennesaw, Roswell and Johns Creek, among others.

Chick-fil-A will open its newest Atlanta area location Wednesday August 11 at 1440 Terrell Mill Road in an outparcel of MarketPlace Terrell Mill, a new center that is slated to one day be anchored by a large format Kroger store.  In light of current events, the restaurant will not host a typical "First 100" promotion, but will instead honor 100 local citizens “making an impact in Marietta,” with free food for a year. Chick-fil-A also will donate $25,000 to Feeding America, a non-profit that will distribute funds to partner organizations in metro Atlanta who address hunger issues.  Chick-fil-A is the third quick-serve restaurant to open in the development following the debuts of Panera and Wendy's.

A new location of Sally Beauty is opening soon in The Terrace at Windy Hill, a strip center at 3000 Windy Hill near its intersection with Powers Ferry Road in Marietta.  The new Sally Beauty will occupy a 1,675 square foot space between Schlotzsky's Deli and Massage Envy in the center once home to Fuddruckers.