A new-to-market restaurant is joining the growing roster of tenants at Star Metals on Atlanta's Westside.  wagamama, a London-based Asian restaurant specializing in Japanese cuisine, has leased the roughly 3,600 square foot space at the corner of 11th Street and Howell Mill Road, according to recently installed signage.  The new Star Metals outpost will be wagamama's first location in Atlanta and just its seventh location stateside. 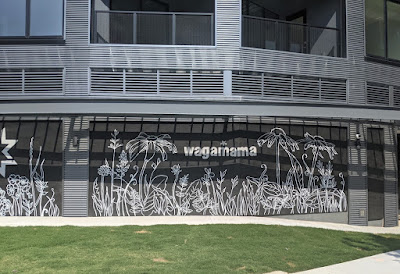 As the restaurant tells it:

"wagamama means naughty child, one who is willful or determined...we’re never afraid to say what we believe in. never afraid to be different, be bold and to stand out. we don’t do mindless corporate talk, we don’t even do capital letters!"

The restaurant's menu features a wide variety of big plates, shareables, wraps and desserts.  For those like ToNeTo Atlanta's editor who are embarking on an "aspirational vegetarian" lifestyle,  wagamama offers several vegetarian options including "avant gard'n: barbecue-glazed seitan served with a coconut + sriracha vegan ‘egg’, grilled shiitake mushrooms+asparagus" and the "kare burosu ramen: shichimi-coated tofu+grilled mixed mushrooms on a bed of udon noodles in a curried vegetable broth."  Classic ramen and teppanyaki dishes as well as various wraps and bao and dumplings are also offered, according to the restaurant's online menu.

Permits for wagamama have yet to be filed so it's unlikely the restaurant will open before the first half of next year.

Have you ever eaten at a wagamama restaurant?  What is your favorite current or upcoming Westside restaurant? If wagamama expands in Atlanta, where else would you like to see them open?