Carlo's Bake Shop has closed both of their Atlanta area locations. Carlo's Bake Shop is based in Hoboken, New Jersey and is owned by Bartolo "Buddy" Valastro, Jr., star of the popular TLC reality show "Cake Boss."   The two Atlanta area shops - both kiosks - were located on the first floors of Perimeter Mall in Dunwoody and Cumberland Mall near Smyrna.  Both locations closed as of this past Sunday.  In advance of their closures the shops were reportedly offering all on hand baked goods for $1 per item. 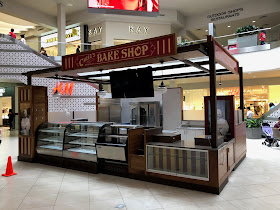 The shop at Perimeter Mall made its debut in April 2017 followed later that September by the shop at Cumberland Mall.  Both malls were then owned by GGP and are today owned by Brookfield Properties Retail.


Sources close to the mall indicate that Winston-Salem based Krispy Kreme has inked a deal to open in place of Carlo's at Perimeter Mall.  Krispy Kreme, owned by coffee-pastry-sandwich juggernaut JAB Holding Company, previously operated a freestanding location on Buford Highway in Doraville, but has not had a presence in the Dunwoody/Sandy Springs area.


It's not yet known what form the new Krispy Kreme kiosk will take but one likely outcome is the uber-cute "Krispy Kreme Doughnut Box" kiosk.  The format is relatively new to America, the first of which opened stateside at Crabtree Valley Mall in Raleigh last August, but the boxes were first installed in malls and shopping centers in the UK in 2016.


The former Carlo's Bake Shop kiosk at Cumberland Mall has reportedly not yet been leased, but depending on the reception that Krispy Kreme  gets at Perimeter, perhaps they would consider it.


Are you surprised that Carlo's closed both of its Atlanta area locations? Do you think Krispy Kreme will do well at Perimeter Mall? What would you like to see open in place of Carlo's at Cumberland Mall?