A new "COVID-ready" quick-serve restaurant will in the coming months make its debut in Atlanta.  Urban Wok, currently a single unit noodle and rice bowl concept from Minnesota, has leased the former Olive Bistro in TOWN Brookhaven in which to open their emerging concept.  Launched in October 2018 in St. Paul, Minnesota, Urban Wok was created by former Chili's Grill & Bar manager Mark Toth. In a way, it's what one might get if they mixed Gusto, Chow Baby and Bolay into one concept. 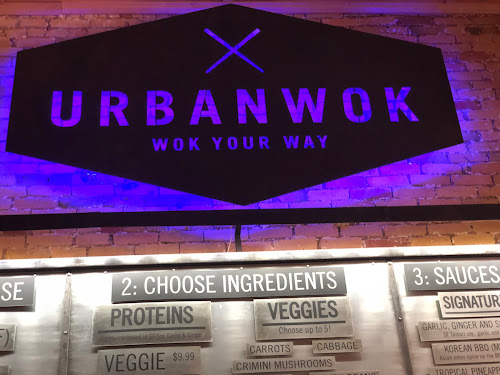 The restaurant invites patrons to "wok your way." Customers are given the choice of several bases (assorted rice and noodles), proteins (chicken, tofu, shrimp, steak), veggies, and finishes such as signature sauces and toppings like sesame seeds or Korean pepper flakes. The restaurant, which is cashless, also features kiosks for ordering to limit touchpoints, something that has become increasingly important in the COVID-19 era.

The nearly 1,300 square foot space that Urban Wok will occupy is small by design, as the restaurant's primary purpose is to pump out high volumes of takeout and delivery food.  Toth discovered that most of his revenue, roughly 80%, was generated from off-premise channels. So, ahead of mandated dining room closures, he shut down his small 50 seat dining room to focus on takeout and delivery, he told Nation's Restaurant News (NRN) in April.

Urban Wok's opening in TOWN Brookhaven marks the return of a wok-centric Asian style restaurant following the 2012 closure of Stir Crazy after about one year in business.

While other restaurants struggle to pivot to a primarily off-premise sales model, Urban Wok is thriving with Toth telling NRN that in any given week, the eatery has seen revenue up from 125% to 200%.

Meals at their existing location start at about ten bucks and are reportedly 30 percent higher when ordered via third party delivery services, according to NRN's report.  Online research indicates that Urban Wok is currently offered on DoorDash, Uber Eats, Grubhub and Toasttab, a service of toast, their POS provider.

Artimus Hart is the Atlanta area franchisee who will be opening the Brookhaven location as well as potentially up to four more in the area in the months to come, according to a phone conversation he had Friday with ToNeTo Atlanta.  Hart tells us that he also plans to offer a couple of local craft beers and an oft-changing variety of "boutique wines."  The inside of the restaurant will also be updated from the prior occupant to include shiplap, subway tile and polished concrete, Hart tells us.

According to Hart, plans call for Urban Wok to make its debut in Brookhaven in November.

In addition to the Atlanta outpost, Toth plans to open additional Urban Wok locations in San Diego and Scottsdale, Arizona, among other markets.

Urban Wok's opening in TOWN Brookhaven is a bit of good news for a project where, in recent weeks, as ToNeTo Atlanta has reported, anchor CMX CinéBistro has closed in addition to Yogurtland, Which Wich and Salon Red Kids.